"It is with heavy hearts that we are writing this notice for the passing of Chris Black. Chris left this world much too soon and has left all of us deeply saddened by his early departure. Chris will be missed greatly by his loving wife Michelle, his son Caelan and his daughters Avery and Madison (Joseph) – along with his grandchildren Kai and Elton. Predeceased by his parents Mary and Duncan, and by his brother Jim, he will also be missed by his sisters Barb and CarolAnne (Tim), brother Nick (Michelle), parents-in-law Eric and Sherrie Piens, brothers-in-law Derrick and Mark, Aunts Darlene and Mica, and cousins Bill, Jay, Gregory, Adriana, Larissa, and Tatiana. Chris loved cheering on his children at soccer and baseball, riding his Harley with the local Hogs Chapter, and of course walking through the neighbourhood talking to all he met, with his loyal friend Kasper, his loving white German Shepherd, always by his side. Chris also had an extensive network of friends and colleagues through his counselling work in Scientology, whom Chris worked unselfishly to help always. Although no service is planned for Chris in the immediate future, Chris will be laid to rest alongside his father and the rest of the Black family at a lovely small cemetery in Eagle, Ontario, this summer.

Chris was born in St. Thomas, Ontario; following an early life of travel and adventure, to the far north, to the foothills of Alberta, and finally to Vancouver, where he honed his skills in fine cabinetry, he returned to Ontario, to meet up with Michelle, start a family, and create a loving home, all while completing two university degrees (including a Master of Science (Planning)).

We will miss Chris’s sense of humour and joy in life, his friendly, outgoing nature (he was always ready to lend a hand), and his true compassion for everyone he met."

Chris began in Scientology in 1976 in Los Angeles while visiting his brother. Training day and night at the new LA Org, he returned to Canada where shortly after his return he left university to begin full-time as a Scientologist and staff member. His first post was course supervisor. He then worked in Qual as a professional word-clearer and cramming officer. Chris's staff experience includes 20 years in Tech and Qual on technical posts. He is a fully hatted Pro Word Clearer, Cramming Officer, Tech Sec, Qual Sec and course supervisor. He is a trained evaluator (DSEC), Staff Status IV, and has successfully raised stats on all posts he has held.

Chris's staff experience includes 20 years in Tech and Qual holding technical posts. He is a fully hatted Professional Word Clearer, Cramming Officer, Tech Sec, Qual Sec and course supervisor. He is a trained evaluator (DSEC), Staff Status IV, and has successfully raised stats on all posts he has held. He was the first (and only) executive to complete the WIAC (What Is A Course) program in Canada.

As one of the few Class VIII C/Ses (HSST) ever made, trained pre-GAoT, Chris is a specialist in C/Sing and programming cases, auditing reviews and repairs, debugging cases (including the use of ethics to debug stalled or failing dynamics), and resolving the BPC the CoS has created due to unjust or harsh ethics actions; over-regging; incorrect programming, C/Sing or auditing; wrong indications; and evaluation. He also delivers Lower Grades, NED and OT setups, OT reviews and is an expert in the area of Clear, having debugged many stalled Clear cycles/cases that upper orgs and even RTC were unable to resolve. Chris also delivers ethics actions when needed to move a person back onto the Bridge and enable them to be more successful in life.

Chris prides himself on adherence to straight LRH tech, applying standard Scientology not only in practice, but in principle. He has blown the whistle on out-tech within the CoS as well as in the field. In fact, his KR on GAoT and COB regarding GAoT as a technical degrade in violation of numerous LRH references resulted in his being declared on false and trumped-up charges. As a Class VIII friend said, being declared by a suppressive group is an honour. 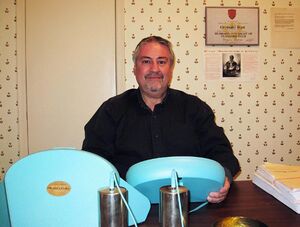 A favourite quote (from the tape "An Afternoon at St. Hill"):

In addition to achieving Full Class VIII Auditor status with Honors, he is one of the few Class VIII C/Ses (HSST) on the planet. Chris trained pre-GAoT (Golden Age of Tech) and is fully trained and interned as an auditor and a C/S on the following:

Chris's purposes are to help others reach their goals in Scientology, to rehab wins that may have been bypassed due to out-tech, to help them realize their full potential through the application of standard LRH technology, and to empower the being to play a better game and live a better life. His intentions are to be effective in auditing through application of standard, to produce beneficial results, and to program and audit the pc in front of him, according to the Auditor's Code.

"The various rules of the game are that it is a session, auditing is based on communication, and the PC in front of you is the PC you've got to audit. You can't audit the meter and get a Clear PC. Sooner or later, you have to face up to the fact you're auditing a PC." (Tape: "Fundamentals of Auditing")

Chris's PCs and students, including those he helped while on staff, know him for his broad outlook on Scientology, his unselfish desire to help others and see them win in life, whether in relationships, on post or in business.

Chris C/Ses and audits out of Toronto, Canada. If you are interested in contacting him regarding his C/Sing or auditing services, or if he can assist you to move up the Bridge through auditing or ethics assistance, you can reach him at standardtechauditor@yahoo.ca. Please leave a number if you wish him to call you.

The entry level for Scientology auditing. One handles life areas, cleaning up and keying-out those areas of bank which life itself has brought into restimulation.

Each org staff member is a specialist in one or more similar functions. These are his specialties. If he is fully trained to do these he is said to be hatted. (HCO PL 28 Jul 72)

Abbreviation for statistics. A number or amount compared to an earlier number or amount of the same thing. Statistics refer to the quantity of work done or the value of it in money. (HCO PL 16 Dec 65)

when the person was originally released he had become aware of something that caused the reactive mind to de-stimulate at that point or become weak. And so he released...More