This book was published in 1957, by The Hubbard Association of Scientologists International in London.

Two authors are credited in this book. They are L Ron Hubbard, C.E., Ph.D and a Medical Doctor called Medicus, but who was in fact Farley Spink. His wife was on the weekend HPA course at the time and told fellow students that the reason for his using a pseudonym was that he was a general practitioner and that, following normal medical practice, a local GP wrote anonymously to avoid advertising, which ethically was not allowed. 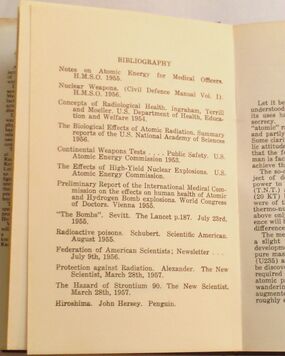 The book is unusual for a Scientology book in that the first part, by Medicus (Farley Spink) had a bibliography; a normal practice in many books, but rare in Scientology. Medicus (Farley Spink) wrote the first 30 pages of the book. The remaining pages of the 109 start with a forward by Johan Tempelhoff D.D (who was well known in London at the time) and then four lectures with subheadings which are taken from The Congress on Nuclear Radiation and Health, given at the Royal Empire Society Hall by L Ron Hubbard between April 12th and 16th 1957.

Looking at this in 2015, it should be remembered that in 1957, the first atomic bombs used at Hiroshima and Nagasaki were fairly fresh in the public's minds with the enormous killing and maiming that resulted. Various countries had made atomic bomb tests, some in the USA in areas near to where early Dianetic organisations were.

An attendee at that congress reports that Hubbard had done experimental auditing mocking up radiation, and Hubbard said that he had made the mock-ups too close to his body, which had detrimental effects. This attendee reported that Hubbard's lips were markedly swollen on one side, which the attendee assumed was the result of mocking up radiation too near the body. The audience apparently got a bit restimulated by considering the subject, and Herbie Parkhouse was reported as being affected and lying down across three chairs in one of the breaks.