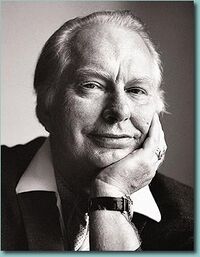 L Ron Hubbard's biography is incomplete here and everywhere else as well.

Our approach is to tell the story from the perspective of the people who knew the man.

This unique idea relies on your help in gathering those stories and posting them so we can present a "multi-viewpoint" perspective which, we hope, will help people come to a more balanced view on their own.

"Lafayette Ronald Hubbard (March 13, 1911 – January 24, 1986), better known as L. Ron Hubbard (and often referred to by his initials, LRH), was an American pulp fiction author and religious leader who founded the Church of Scientology. After establishing a career as a writer, becoming best known for his science fiction and fantasy stories, he developed a self-help system called Dianetics which was first published in May 1950. He subsequently developed his ideas into a wide-ranging set of doctrines and rituals as part of a new religious movement that he called Scientology. His writings became the guiding texts for the Church of Scientology and a number of affiliated organizations that address such diverse topics as business administration, literacy and drug rehabilitation."...[1]

If you do a Google search of L Ron Hubbard you get a wide variety of results, but nowhere will you find an accurate, truthful, unbiased and complete biography of LRH.

We won't go into all the reasons for that here, you probably already know why. But if you've looked around this site a bit and understand the concept of the Semantic Wiki, you've got the idea that we have for the first time an opportunity to put the record straight.

LRH deserves proper treatment. Neither deified nor defiled. Just a wide-eyed, sober and honest detailing of a life well-lived. A life that has impacted millions of people and yet somehow seems to have evaded honest description.

Got an itch to put the record straight? Now's your chance.

The Infobox on the right needs work as does the life story. You are invited to take part in this evolving, collaborative process and give the world the definitive and authoritative account of LRH's life!

Oh and by the way, nowhere else can you find an organic biography alongside the traditional. Search-able semantically to present a 3-D perspective of the man, the time, the research and the results!

WITH CONTRIBUTION FROM A TEAM OF EDITORS, THE FIRST ACCURATE AND COMPLETE STORY OF L RON HUBBARD CAN BE TOLD.

AN UNVARNISHED, UNBIASED AND HONEST TELLING OF THE LIFE OF THIS AMAZING MAN. 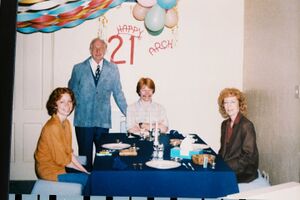 "It's Arthur Conway Hubbard's ("Arch") 21st. He was born in 1957. So this would be 1978" (Dan Locke) "...left is his daughter Suzette, to the right Mary Sue." (Mike Laws) "...This was in '79 and is one of the last times LRH met with MSH at the Int Base. I was there, in the other room through that door in the photo. This was at LRH's house - Bonnie View.... MSH was living in LA and LRH in Hemet and met up with the kids for Archie's birthday party. They did the same for Suzette's that year as well." (Sinar Parman)

"The original BV house interior had a Roman motif as specced by LRH, you notice there are no chairs. on the sides, but long benches. Barry Stein was his architect and designer at the time, and later designed the Clipper ship/pool complex for LRH." (Sinar Parman)

HERE'S AN EXAMPLE OF HOW THE "ORGANIC" BIOGRAPHY - the 'Anthology', CAN BE PRESENTED ALONG WITH THE TRADITIONAL

IF YOU WERE THERE - YOU CAN DOCUMENT IT, RIGHT ALONGSIDE THE TRADITIONAL BIOGRAPHY, WITH THE HIGHEST SEARCH RANKING ON THE SUBJECT OF SCIENTOLOGY AND SELF-HELP AND L RON HUBBARD...SO YOUR STORY GETS FOUND AND READ BY MILLIONS OF PEOPLE ON INTO THE FUTURE.

I do not think Hubbard could have put together the vast body of knowledge that he did if he had lived his life as an alter boy. I found most of his early exploits rather funny. He didn’t do anything but charm his way and talk his way through life. He kept people interested, he offered adventure, he offered to take people places they had never gone before, and he did. He made people forget who they were and think with what they could be.

I saw his scams as playful and mocking. He did some things I wouldn’t do, but he found things I could not find, and then he shared them with me. He accepted himself as the only authority. That takes amazing responsibility and courage. He glanced at our ordinary and less than than ordinary lives and took us on amazing adventures. And he could not have done any of it, if it were not for us contributing to that motion.

I never viewed Scientology anyway, or Hubbard, in the ways they were marketed and presented. I think there are people who spend their entire lives in Scientology and do not know what it is. Still thinking with it as “mental health science” or a “science” or a “religion”. It was none of those things to me, ever. And Hubbard was not a God, or Metteyya, or etc etc etc on all things he was presented as.

I saw him as a master at psycho-physics with a keen insight into magic and social intercourse. He did not view life from the same angles as everyone else and had to get clever with producing angles people could view him from and identities they were comfortable with.

If he had not been a potential trouble source at some point, he could not have mapped it out. I find it shocking that anyone could assume that Hubbard was never PTS in his life. He had a very long history of being PTS. He WAS suppressible. David Miscavige was able to suppress him. And he is still suppressing him. Just go over to E.S.M.B. and you will find a culture of people fair gaming Ron. An ARCXen field Miscavige has never bothered to repair. Hell, Miscavige was able to suppress the I.R.S.! Hubbard hid from them!

Let’s find something real. Hubbard. O.K. so he lied on his resume. Who here has never lied on resume? I would like to know who here, has never ever lied on a resume? Who here EVER told someone they quit their last job because the boss was an suppressive ass hole, to the new boss that is interviewing you? Who here, types in BOLD on the resume, “I am a Scientologist so I can tell you right now you are getting a homo-novis when you get me!” or, “From 1982 to 1987 I worked as a religious fanatic in a cult.”

Why was Hubbard supposed to be 100% truthful? So he could get suppressed some more? Just LOOK at how people ARE using the truth to suppress him NOW. He lived in a viscous , sadistic, world. The biggest crime - being there and communicating."[2]

As used in this context, it refers to re-using data from web pages that would otherwise not be available anywhere other than the single web page it is published on. A Semantic Wiki like this one, is enhanced Wiki software (like this in-line glossary function) that is far more complex and sophisticated, with advanced data collection, display and reporting methods. It is able to make relationships in the presentation of data to the user in ways regular Internet applications cannot.

POTENTIAL TROUBLE SOURCE, 1. a person or preclear who “roller-coasters,” i.e., gets better, then worse. This occurs only when his connection to a suppressive person or group is unhandled and he must, in order to make his gains from Scn permanent, receive processing intended to handle such...More

1. Homo man, novis new. (BCR, p. 12) 2. a theta-animated mest body posessed of new and desirable attributes; a mest clear, a good, sane rational mest being about a skyscraper higher than Homo sapiens. (HOM, p. 40) 3. the Second Stage Release is definitely Homo novis. The person ceases to respond like Homo sapiens and has fantastic capability to learn and act. (HCOB 28 Jun 65)