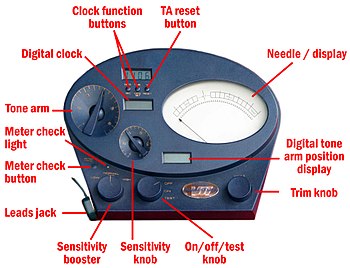 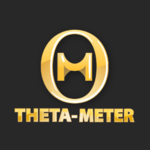 Scientology Meters (e-meters) are used by trained counselors, (auditors), to help find and relieve areas of case, or "charge", which clients, (preclears or "pc's" for short) would not be able to locate themselves without its help.

"The first moving-pointer current-detecting device was the galvanometer in 1820. These were used to measure resistance and voltage by using a Wheatstone bridge, and comparing the unknown quantity to a reference voltage or resistance. While useful in the lab, the devices were very slow and impractical in the field. These galvanometers were bulky and delicate." [1]

L Ron Hubbard did not invent the e-meter but his genius was in the fact he recognized its potential for aiding a Dianetic or Scientology counselor to precisely identify areas of mental or spiritual trauma.

Like the great entrepreneurs Bill Gates and Steve Jobs, Hubbard took an existing technology, and with a vision for a new application of that technology, created a new paradigm from it.

Probably the most misunderstood, maligned and mis-characterized aspect of Scientology is the e-meter. It has become a focal point of attack against the subject out of fear, ignorance and malice.

The E-meter is a rather simple device working on a simple premise i.e. mental mass adds density to the human body, it produces a change in the resistance to a small current passing through the body which can be detected by the e-meter and represented in the e-meter's readings.

The Church of Scientology's decades long misbehavior has done much to exacerbate the confusion surrounding the meter and thereby defeated clear understanding of the subject.

In spite of the CoS's ineptitude at being a worthy ambassador for the subject and practice of Scientology, many of us outside the corporate church use the e-meter as it was intended - to help people discover themselves in very profound and life-altering ways.

An e-meter in the hands of a skilled counselor is a beautiful tool for self exploration and self improvement. If you doubt this statement, avail yourself of the opportunity to try one yourself.

Most of these meters can be bought on Ebay

Meters that are currently in use by the church and Field practitioners are listed here. (for more info on the history of meters go here 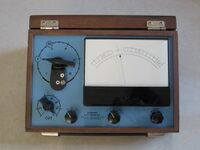 The Mk V e-meter has been a work-horse of Scientology auditing for over four decades. It delivers reliable performance and is especially well suited for new auditors and lower Bridge PC's.

The Mk VI emeter was introduce in the early 1980's and represents improved sensitivity and needle response as well as built-in functions such as tone-arm counter, longer battery life and sleeker design.

The MK VII meter came out in the late 1980's and was yet another upgrade to sensitivity, battery life and other features such as digital tone arm counter, date/time readout and other packaging upgrades such as improved electrodes (cans), connectors and carry case.

It should be noted that from the release of the Mark VII onward, the driving consideration behind new versions of church meters was marketing and revenue driven rather than performance. Many would argue that as far as analogue meters are concerned, the MK V or VI perform sufficiently to accomplish the goals of auditing.

The Mk VII, Mark VII Quantum, and Mark VIII have improved sensitivity but fall short of the overall benefits of a digital meter such as the Theta Meter.

Same as the Mk VII with better packaging and improved sensitivity adjustment and control capability. 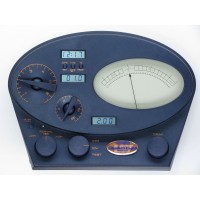 The Mark VIII was released for sale to the Scientology public in 2014. It was manufactured in 2002 and had been sitting in a warehouse since 2004. This "new" technological improvement costs parishioners $5000 and is mandatory for the latest auditor training in the church. (GAT II)

[1]Theta Meter (digital - desktop, laptop, iOS, android) - Get $10 discount by putting "Scientolipedia" in the comments when placing your order![2]

The Theta-Meter is a valuable tool for practitioners in the clearing field. It has all the features many other expensive models offer - but at an affordable price.

Theta-Meter is the only one e-meter that works with all popular operating systems: Windows, MacOS, iOS, Android, Linux, Chrome OS. 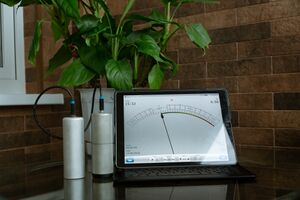 It is easy to use and simple to install. It's program is customizable for both variations in technical application or personal taste.

The two most prominent features of the Theta-Meter and it's software program have to be the automatic feature - allowing for handsfree use (on both standard and circular needle/dial setting options). Plus the built in graph allowing you to track reads which may have been missed. Another great feature is the ability to record sessions for possible reference in the future.

I use my Theta-Meter everyday in both solo and co-audit capacities. It is a breeze to use. I highly recommend it to anyone in the field needing a GSR/bio-feedback device. Five stars all around - great product, perfect price, and support from the retailer are an unmatched combo!

Get $10 off your purchase when you put "Scientolipedia" in the comments when ordering! Theta Meter Website

Having perfect technology of life management and mind understanding, we should also possess perfect technical means, making auditing as comfortable as possible.

iMeter is a wireless e-meter, which works with desktops, notebooks, tablets or smartphones over wireless bluetooth connection and if needed over USB cable.

iMeter is built-in in solo can, so for solo auditing you don't need anything except for solo can with the built-in iMeter and your favorite mobile device, notebook or desktop computer.

Thus solo auditing can be done in absolutely any place and under any conditions. No cables and falling off connectors can disturb you any more.

For 15 years, Clarity Meters have been the standard of quality and reliability in Clearing biomonitors. Now, the PC-based Virtual Clarity Meter is available!

* Refers to the needle as a mechanical, physical device or a software, image based device. (mechanical meters have digital features such as readout or needle controllers)

** Price reflects after-market retail prices for Church of Scientology meters. e.g. New Quantums purchased from the CoS are $3500.

*** Currently available only through the CoS