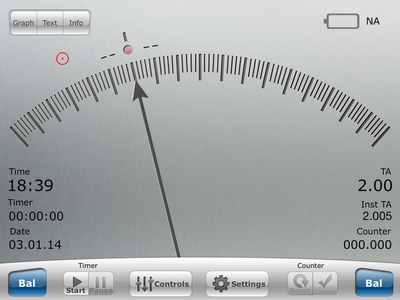 (This is the FaceBook abbreviated version) full Version posting on Scientolipedia soon.

Over the last several months, I have had the opportunity to use and test two versions of the Theta Meter Product Line in A/B comparisons to Quantum Mark VII Meters.

Recently, the applications were completed for distribution and sale of the Theta Meter line on Apple iPads and other iOS devices through the Apple App Store, as well as Android tablets and smartphones through Google Play. This may not be a big deal to some, but, it really is a huge win for dissemination of metering technology worldwide, making it feasible to audit someone with a smartphone or tablet nearly anywhere, not to mention raising awareness of the concept itself. This is truly a major breakthrough. There are many versions of the theta meter available, we covered the most recently issued model, the Theta Meter Pro, as it is the most advanced in technology

Our tests were done using the Theta Meter Pro in tandem with the Mark VII to compare reads and tone arm values. It must be noted that the Mark VII is a meter made by the lowest bidders through the COS and is the stable datum for a majority of auditors in the field. It is NOT made with the highest quality parts and arguments could be made against it being a truly accurate meter for these reasons. Other analog meters are being made by third party companies with higher quality parts and better response in function than the Mark VII and have been for years. We decided to do our comparisons with the Mark VII as it is the most widely used despite these reasons. In short, it is the most widely used stable datum out there, but not the most accurate in comparison to other analog meters available to present. This review is a comparison of the Theta Meter Pro in comparison to the widest used analog counterpart available.

Theta Meter Digital Meter - click image to learn more - Get $10 discount, use "Scientolipedia" in the comments while placing your order!

The Theta Mater comes in two parts, as most computing devices do these days, in the form of software and a human interface. The software is available for free in a reduced functionality mode or for $50 USD as a fully functioning application in the App Store and Google play. The application is frequently updated with new features and adjustments as needed. One needs the hardware portion of the meter to use the app. This can be purchased both in the United States and Russia, though Russia takes about two weeks via parcel post. One can purchase cans along with the Theta Meter Pro, which are some of the best made cans we have ever seen on the market, or you can use cans you already have, as long as they have a 1/4 inch jack. The units we received to review were built very sturdily and came with the router needed to create a network with which to transmit the data to the application on our iPad Air tablet. Setting up the network was easy, as directions are provided on the Theta Meter web site, as well as directions for first time users in getting started with the meter itself as an auditor. It is advised to use the fastest processor available on a tablet with all other applications closed and notifications shut off so as to not disturb the auditor or solo auditor in session. This leaves all the tablet's resources to the Theta meter app for its functionality and not sharing resources with other applications on the tablet. However, we found with other apps open, we had no trouble with it functioning normally without a drawdown from lack of resources.

There is no need to set the Trim on the Theta Meter Pro, a big plus. All the controls for sensitivity and body motion detection are adjustable by the auditor with the touch of the display. We couldn't be happier with how simple it is to adjust the sensitivity, looks of the display, and adjusting the needle to set. All of the functionality of keeping the needle on set can be done automatically or at the users discretion with a single touch of the needle dial, or on either side of the dial, all at the users preference. Very cool!

The user has the option to automatically bring the needle to set if one chooses through a toggle in the application. It does take some getting used to in comparison to an analog Mark VII, however we adjusted to it in less than a few minutes use out of the box. We found the sensitivity, after adjusting by can squeeze of the Theta Meter Pro, to be just as easy as an analog counterpart. One can set the sensitivity to adjust automatically like a Quantum, or you can turn the feature off with a touch of the screen. Something Quantums don't have. The sensitivity was equal in value to a Mark VII, however, Floating Needles were more visible, as were ticks and stops. Instant reads were more responsive also being due to the lack of physical universe vias in the mechanics of analog meters.

Just like an analog meter, one should make sure their tablet and router are fully charged before session. The router provided can be substituted with one's own router and passworded if needed, or for economical reasons if you wish. We found NO delay in reads in comparison to the Mark VII Quantum, they were more instant actually. So, for those who worry about that, it is a non-issue. In all, over the last four months of use, we found the Theta Meter Pro to be more revealing on reads by far than a Mark VII in session, with pre-clears and solo, in every auditing situation.

In summation, the Theta Meter Pro is as economical and open ended of a meter package as you can get. It is affordable, upgradeable and hasn't failed once in hundreds of hours of use. Mikhail Fedorov, the designer of the system hardware and application, has put thousands of hours into testing and upgrading this system, and it shows. It is truly a valuable final product worthy of any auditor's investment and highly recommended. The learning curve and adjustment time from analog meters is incredibly short with the intuitive and thoughtful layout of the application. The hardware is as simple to use as plugging in the can leads and switching on the supplied router.

After months of use, I prefer to use the Theta Meter Pro as my go to meter, without reservation. It totals up the T.A., shows the T.A. range and session total time with a touch of the tablet display. Truly a 21st Century Meter for today's auditors that Ron would be very proud of and surely use himself.

Further features will be covered in the full review of the Theta Meter Pro here on this page.

Pros: Well thought out application with all the necessary features for a 21st Century meter and then some. New functionality is being incorporated monthly. Economical, very small form factor, and readily available to all on multiple platforms of tablet and smart phone. Most of all, the Theta Meter Pro is far more accurate on all reads in comparison to a Mark VII, as well as allowing sessions to be recordable and sent to case supervisors, or for review by the auditor when needed. Customer support was always speedy and handled the problem, even via Skype if needed.

Cons: Meter Shield is not provided; you will have to make/buy your own. One needs to own an Android or Apple iOS device in order to use the meter application on a tablet or smartphone, so plan to purchase a speedier (read recent) model in order to audit with the Theta Meter Pro. Shipping from Russia can take time, so be patient once ordered. All in all, we give the Theta Meter Pro four out of four stars and highly recommend adding this to your toolbox as an auditor or solo auditor.

Get $10 off your purchase when you put "Scientolipedia" in the comments when ordering! Theta Meter Website

THIRD PARTY LAW, the law would seem to be: a third party must be present and unknown in every quarrel for a conflict to exist. (HCOB 26 Dec 68)