Observation Mountain overlooks the town of Grand Forks, B.C. It was officially named in 1860 by Boundary Commission surveyors as they used the site to set up their survey instruments. This area is called Boundary country because it runs along the border between Canada and the United States. Grand Forks is within minutes of two border crossings.

Observation Mountain Academy is here to help people handle life's problems through Training and Counselling all based on the works of L Ron Hubbard.

We are trained and experienced in listening to you and helping you to eradicate stress, trauma and inhibition from your life. Simultaneously you attain higher states of awareness. Here, you can also learn to apply this method to others.

This is securely done on a one-on-one basis in the safe & peaceful surroundings of the Observation Mountain Academy; where you and your enhancement are the most important things on Earth... 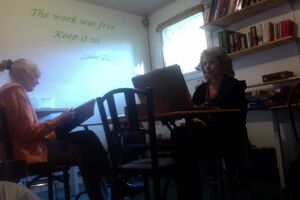 This is a small academy offering basic lectures and training in the traditional philosophical and practical works of L. Ron Hubbard. We're not selling "wellness". We're not going to tell you that if you attend a talk or do a course that you will thereafter be a happier or healthier person, or an expert on Life. Just like walking into a hardware store and looking at a bunch of hammers and screwdrivers doesn't make you a carpenter. BUT, just having seen the tools and having some idea how they work, this alone might make you a little more confident and willing to face some of the more difficult jobs around the house. In the same way, we figure if we show you a few tools designed to fix situations in life and give you an outline of how they work, maybe you'll feel a little easier about facing those situations. Then, if we sit you down and drill you on the use of these tools, maybe you'll gain some confidence, even eagerness, about fixing those problems.

If there's some place in your personal universe where friction from dealing with the universes of others has caused some wear, there's probably a tool somewhere in our "toolkit" that's designed to fix it. And we're not guaranteeing it'll get fixed. We'll show you the tools and some ways of using them, but you have to do the fixing yourself. We all have problems, some of which are easily handled, while others have been difficult to fix. We're not necessarily "experts". We're still learning, like everybody else, but we have found that these tools work well enough and enough of the time that they're worth telling others about.

The underlying philosophy that we operate on was developed by L. Ron Hubbard during the first half of the last century. He called it Scientology.

The entry level for Scientology auditing. One handles life areas, cleaning up and keying-out those areas of bank which life itself has brought into restimulation.