Mary Sue Hubbard was L Ron Hubbard's confidant and third wife, mother of four of his children and a fierce defender of her husband and the movement he created.

Biography By Howard Dickman with assistance from Antony A Phillips 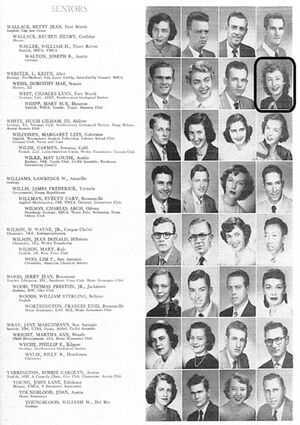 By time Mary Sue's brother was born the family was living in Harris County, Texas[5]. In August of 1944, the family traveled to Louisville, Kentucky, where Mary Sue was one of the flower girls for her aunt's, Miss Marguerite Whipp, wedding[6]. When Mary Sue was eleven, her father (a manager at a Sears and Roebuck store in Houston) passed away at their home [7].

After Mary Sue's freshman year of college at Rice University[8] she attended the University of Texas at Austin, the same university her mother attended [9]. Mary Sue is on three pages of the University's year book - "Cactus Yearbook, Class of 1949". She is listed in the sophomore section of the book on page 112. On page 473, Mary Sue is included in the Tumble section and on page 487, she is listed in the Theadorne section of the "Women's Cooperative Association". Incidentally, 1949, is the same year that Tom Landry, future coach of the Dallas Cowboys, graduated from the University of Texas at Austin. They may have crossed paths during their time at the university.

1951 was Mary Sue's senior year at the university. She is listed in the senior section, page 409, of the "Cactus Yearbook, Class of 1951". She majored in English and had activities of WICA (Women's Inter-Community Association), Touche, Tumble and the Houston Club.

The "Women's Inter-Community Association" was an organization of independent (non-Greek) women students similar to the organization for men (see MICA). Both groups faded out in the late 1950's.

MICA (Men's Inter-Community Association) was organized in 1937. It was organized for social, religious, and athletic benefit of non-fraternity men.

This chapter of her life is conjecture as I have found no first person report as to how and when Mary Sue Whipp arrived at the Hubbard Dianetic Research Foundation in Wichita, Kansas. But what I will try to do is present a premise as to what I think might have happened.

Mary Sue Whipp traveled to Wichita, Kansas, with Norman W. James and one other, in order to attend the First Annual Conference of Hubbard Dianetic Auditors, held June 25 through June 30, 1951.

Based on first-hand account by O’Brien and corroboration by Miller we know Norman James was at the Foundation in 1951. Eubank’s first person account lets us know Mary Sue came with two other people. Based on the aforementioned accounts, Mary Sue and Norman James, who by August, 1950, had worked over 184 hours of Dianetics, knew each other. Due to the fact that the Church of Scientology has kept the August, 1950, letter from James to Hubbard, we can pretty well surmise that the Foundation had James on their mailing list, in which case James would have been notified of the June, 1951, Dianetic conference. Graduation from the University of Texas at Austin occurs towards the latter part of May and from Kaye’s first person account we know that Mary Sue was not there before June 1, 1951, even though the Church states that Mary Sue came to The Foundation in early 1951.

There was a Dianetic Conference held the last part of June, 1951, during which, “One hundred and twelve HDAs, representing every section of the United States and Canada, met for the dual purpose of attending a special course of instruction on new techniques and to form an International Association of Hubbard Dianetic Auditors”, as stated by the Church of Scientology. Given the Church’s propensity to sometimes use hyperbole and the fact that Chapdelaine brought his PC and two members of the Mobile and Fairhope, Alabama Dianetic club with him to Wichita, an assumption could be made that not all one hundred twelve attendees had HDA’s.

So what would entice three Texans to all come together all the way from Texas to Wichita, Kansas in 1951? Since Chapdelaine brought three people all the way from Alabama to Wichita for the conference, a good assumption could be drawn that Mary Sue, Norman James and one other Texan made the same trek.

The clues cited in the aforementioned discussion have been gleaned from the following sources:

1. June 1 (1951): "I went to Wichita. I accepted an engagement ring from him but when I got back realized my mistake. I didn't know Mary Sue, don't know if she was around at time." (Russell Miller, Bare-Faced Messiah, October 1987, second interview with Barbara Kaye, August 21, 1986)

3. Perry learned that the Foundation was going to host the First Annual Conference of Hubbard Dianetic Auditors from June 25 to June 30, 1951, so he made plans to attend. He brought Clint (Perry’s PC) and two members of the Mobile and Fairhope, Alabama Dianetic club with him to Wichita. (Perry Chapdelaine’s biography, http://scientolipedia.org/info/Perry_Chapdelaine)

After 184 hours work with Dianetics, I can only say that I have become more and more convinced of its basic value every hour I have worked with it. (Letter to L. Ron Hubbard, Church of Scientology site, http://dianetics.lronhubbard.org/page34.htm)

5. Bud was the enfant terrible of the Wichita foundation. He was a college student, destined to be a doctor, when he learned of dianetics. He became a professional auditor at the Los Angeles foundation, and at the time I knew him in Wichita, had just worked with Hubbard on a new set of dianetic axioms. Noyga, of course, was one of us. And the fourth was a tall, blond Texan named Norman James, an excellent chess player, who'd also walked away from college when the dianetic bugle sounded. (Helen E. O’Brien, Dianetics in Limbo, 1966, page 41)

6. Among the motley collection of well-meaning people who trekked to Wichita in the summer of 1951 was a slim, pretty girl from Houston, Texas, by the name of Mary Sue Whipp. Born in Rockdale, Mary Sue was a nineteen-year-old coed at the University of Texas intent on making a career in petroleum research. She arrived in Wichita with a friend, Norman James, who had read about Dianetics in Astounding and had persuaded her to join him on the course. (Russell Miller, Bare-Faced Messiah, October 1987, Chapter 11)

7. Although scheduled for a career in petroleum research, she had found Dianetics and on graduation from the university insisted on following it as a career. She came to the Foundation in Wichita, Kansas in early 1951 and received her Hubbard Dianetic Auditor's Certificate and then became a Foundation staff auditor. (Church of Scientology, The Auditor #21, 1967, page 1)

8. She had come to Wichita with two young men from Austin, Texas. The three Texans all knew each other when they came to take the course. They had come to know each other by being mystically inclined. They were all three members of a student group. The Theosophy Club. Reincarnation, astral levels, etheric bodies, teleportation, telekinesis were of interest to a small group there including Susie and her two theosophy club friends from Texas… (Dillard Eubank, International Viewpoint, Issue #74, November 2005, page 39)

From March 3, 1952 to April 1952 L. Ron Hubbard delivered thirty-five lectures to professional course students and the Hubbard College[10]. In spite of Ron’s full schedule, he and Mary Sue made time to get married. On Thursday, March 6, 1952, they drove south to a city eight miles south of the Kansas border - Newkirk, the county seat of Kay County, Oklahoma where they were able to get married the same day[11]. 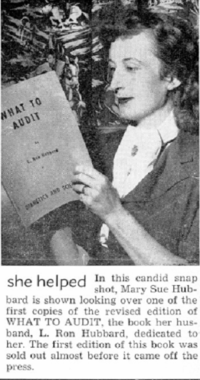 When I was around the London Org in the 1950's Mary Sue Hubbard was a well known name. I did not see much of her and that is really no surprise, for Ron traveled usually twice a year between London and Washington, and Mary Sue would have been fairly busy giving birth to and looking after four children – Arthur being born in Great Britain.

Things were different in the 60's. I joined Saint Hill Staff in 1964 and Mary Sue worked hard there and you would see her walking nimbly around from time to time. At one time I worked in mimeo, and Mary Sue was responsible for Financial Planning for Saint Hill (which seemed to run very well in those days). Once a month I got a bundle of things I should run off and managed to get them done within the month. I conceived the idea that we ought to go in for offset printing. I researched the subject pretty thoroughly and prepared an application to financial planning for the purchase of such a machine (a Gestetner). Such an application was called a CSW (Completed Staff Work) and should contain all the details necessary for Financial Planning to make a decision. I got a commendation from Mary Sue for my CSW.

Years went by. I got thrown out of the "Church", joining the growing number of Ex-"Church" members, who kept communication going, and we learnt that Mary Sue had died some years previously. No announcement was made to members of the organisation that her husband had founded and led and she had served industriously for many years, and it fell to the lot of an amateur investigative journalist amongst us "freed Scientologists" to look through death certificates and find Mary Sues death certificate. The news of here unannounced death went round freed Scientologists quickly and it was not long before a memorial page was put up for Mary Sue, and you can see it at http://marysuehubbard.com.

A personal note: It makes my blood boil (metaphorically, luckily) to see Hubbard's wife and long term ardent supporter made a non person by the "Church". Completely in opposition to the original spirit of Scientology and free communication. A sure sign of a decadent organisation.
Antony A Phillips

Financial planning means - how to handle the money and assets of an org so as to maintain outgo below income. (HCO PL 26 Nov 65R) Abbr. FP