Janis is the third child of Peter and Yvonne Gillham. She was born when her parents were heavily involved with Scientology. She was one of the original L. Ron Hubbard's Commodores Messengers. In 2017 she published her first book about her time in Scientology up to 1970. Her second book is slated for release in September, 2018. One last book is planned.

Life on the Apollo[edit | edit source]

Janis was eleven years old when she arrived on the Sea Org ship, the Apollo, accompanied only by her sister and brother. From 1968 to 1975, the Apollo was her home. 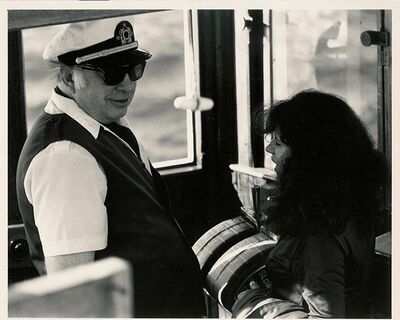 Janis and LRH aboard the Apollo

Janis' first book deals with her life in Scientology up to 1970.

Here is her introduction from her first book;

Before reading this book, it is best you have an understanding of who I am.

My father is Peter F. Gillham (AKA Pete or Peter Snr.) who, in the 1970s, was known as one of the top lecturers on the subject of Scientology. In addition to his lectures Peter authored two successful books “Tell It Like It Is” and “The Fundamentals of Success” which thousands of people credited with helping them. He later became internationally known as a nutritionist with monthly newsletters giving nutritional advice and tips. In the 1980s he developed instant CalMag, leading him to develop Natural Calm by Natural Vitality in the 1990s, which he writes about in his book “The Miracle Nutrient.” Natural Calm remains a best-selling magnesium supplement and has helped thousands of people internationally improve their health.

In the mid-1960s ”the Gillhams” were regarded as Scientology’s first family in Australia. When Scientology was banned in the Australian state of Victoria, my parents moved the family to England. Shortly afterwards we moved to the Scientology ships. In later years, we were accepted as the second family of Scientology. Yvonne headed up Scientology’s Celebrity Centre and built it to more than two hundred staff, while Peter introduced people into Scientology through his books, lectures and as the Executive Director of the Scientology Phoenix mission. Meanwhile my sister Terri, my sister-in-law Doreen Smith-Gillham and me were all senior ranking Commodore’s Messengers working directly with L. Ron Hubbard, founder of Scientology. My brother, Peter Jr., also worked directly with L. Ron Hubbard on the ship and on land.

As a child of 11, in January 1968, I arrived on the Scientology ship, the Royal Scotman where I became an original Commodore’s Messenger for L. Ron Hubbard. Over the next 11 years I spent six hours or more a day with L. Ron Hubbard, until December of 1979, when shortly after, Hubbard went into “hiding” with fellow Commodore’s Messengers, Annie and Pat Broeker. Hubbard passed away in January 1986.

Many who were there say I was raised by Hubbard. My husband jokes that I was raised by wolves (living in a pack), but I believe I was not raised at all, but grew into the world around me. Ha!

Having lived on the Scientology ship, Apollo (previously named Royal Scotman) for eight years as a personal messenger for L. Ron Hubbard and then another three years by his side as he moved around the U.S. east coast to the west. As Commodore’s Messengers, we were direct representatives of Hubbard within the world of Scientology. After 22 years, I left in August 1990, no longer able to agree with the direction the Church of Scientology was taking. Along with my husband of 11 years, we disappeared into the night to raise a family outside of the world of Scientology. 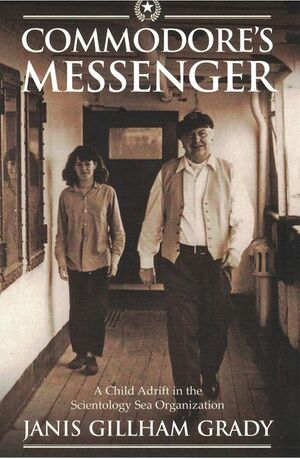 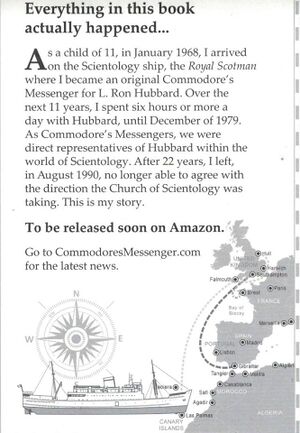 "Any excuses for not having read my book, Commodore's Messenger A Child Adrift in the Scientology Sea Organization, are no longer accepted! It can now be downloaded in audio form from at least 3 different audio book sites.

Book II Riding out the Storms, paperback is now complete to be released September 1st, so that gives you a couple months to be ready!"

Janis talks with Dave LaCroix about her book, "Commodore's Messenger", life growing up in Scientology's Sea Organization, working with L Ron Hubbard, and a number of other topics.
(her first interview with a Scientologist)

Watch this exclusive podcast interview on a wide range of topics only a veteran Scientologist would know to ask!

1. A group granted the privilege of delivering elementary Scn and Dn services. Does not have church status or rights. (BTB 12 Apr 72R). 2. A formally authorized individual or group sent out to perform a specific task or duty. (FO 2530R)