The Excalibur was an ex U.S. Navy ship that was refurbished for use as a Sea Org training ship, based out of San Pedro, California. For history of it's war time service click here.

In June of 1971, Scientology bought the former U.S. Navy ship, the USS Rexburg, just before it was scheduled to be made into scrap metal and shipped off to the Far East. The ship functioned as a training vessel for the Sea Org with units of the DPF and the RPF working and studying seven days a week.

Events of the Excalibur[edit | edit source]

Personnel of the ship[edit | edit source]

Captain's of the Excalibur[edit | edit source]

Amos Jessup. Amos Jessup was born in 1945, the son of a senior editor at Life magazine. In 1966, while a philosophy major studying in England, he had gone to Saint Hill to try and get his brother out of Scientology. He instead became involved in the subject himself. In June, 1967, Amos arrived in Las Palmas as part of the Sea Project. In October, 1967, he signed on as one of the original members of the newly created Sea Org. During the early days of the Sea Org, Amos and Yvonne Gillham did two survey missions together, one to Corsica and one in Marseilles. Amos was promoted "by merit" to Lt. Commander (RA) by LRH Flag Order 2342 on the 24th Jan 1970. He was one of the students on the original Expanded Dianetics Course. In the spring of 1973 he became captain of the Excalibur, a position he held until the fall of 1973. He was part of the Excalibur’s RPF during 1974 and early 1975, after which he became the Commanding Officer of the Toronto Org, and later, a research auditor for the New Vitality project and a C/S at the Clearwater base. He returned to civilian life in 1979, and became an engineer and a writer.

Scott Mayer. Scott Mayer was born July 25, 1943, in Chicago, Illinois. He served in the U.S Navy during the Vietnam war. In the late 60's he joined Scientology and rose to the brevet rank of Captain in the Sea Org. During 1973 and 1974 he was Fleet Captain over the three Sea Org ships that made up the U.S. Pacific flotilla. He left Scientology in 1976 and passed away October 6, 2005. 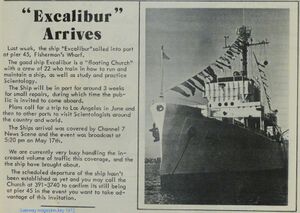 The Excalibur in San Francisco, May 1972.

The Rehabilitation Project Force (RPF) was created by Flag Order #3434, January 7, 1974. Ken Urquhart thought up the concept of the original RPF. This was in response to an order from L. Ron Hubbard to do something about the people on the Apollo who were manifesting case on post.

The Excalibur hosted an RPF of its own, from February 1974 to the sale of the ship. The first Excalibur RPF Bosun was Nathan Hayes. In March of 1974 the RPF produced its very own Newsletter. In May of 1974 the RPF was used in the engine room of the Excalibur. In August, 1974, the Excalibur's RPF was used to renovate the basement of the newly acquired Chateau Elysee. The RPF members were commended in FLWUS ED#320, dated August 15, 1974. In January, 1975 the RPF did a deep cleaning of the galley of the Excalibur. In February, 1975 the RPF produced another newsletter. (see the documents below in the picture gallery).

RPF members were used during the campaign of gubernatorial candidate Bob Moretti. Here is the testimony of Scott Mayer during the Clearwater hearings on Scientology May 8, 1982 - "I personally brought sixty people up to the governor's campaign in, I think it was, 1974. I was asked by the Guardian's Office to provide Rehabilitation Project Force personnel to back one of the gubernatorial candidates in California. He lost, by the way, but, nonetheless, I had them up there, and I got a commendation for it - I still have it, by the way - for my actions in bringing Scientology into more good favor in the State of California."

Here is a personal story about the RPF - The Excalibur's RPF

Pictured below is an actual copy of an RPF graduation certificate, dated February 13, 1975.

This page links to the following file;

This is the equivalent to a policy letter in the Sea Org. Contains policy and sea technical materials. (HCO PL 24 Sept 70R)

The org is commanded by the Commanding Officer (SO orgs). (HCO PL 7 Mar 72) Abbr. CO

end phenomena: 1. "those indicators in the pc and meter which show that a chain or process is ended." It shows in Dianetics that basic on that chain and flow has been erased, and in Scientology that the pc has been released on that process being run.

The Rehabilitation Project Force has been created by the Commodore so that redemption can occur. (FO 3434) Abbr. RPF

1. a coined word, meaning matter, energy, space and time, the physical universe. All physical phenomena may be considered as energy operating in space and time. The movement of matter or energy in time is the measure of space. All things are mest except theta. (Abil 114-A)...More