STEVE BISBEY DEPARTED this life on 7 October [2004] in East Grinstead, West Sussex, England, He had been ill for some time, and moved on peacefully with his wife and daughters at his side, He joined the COS in the early 70's and was on staff at St Hill Manor as auditor and later Case Supervisor trained at Flag, Having left the CoS in the early 80's. he put himself forward as a pioneer of the Independent movement. The Spinney [the name of a house in East Grinstead, which became a prime delivery centre after the Scientology Reformation, Ed], of which he was one of the founders, became a symbol of the continuity of the tech. It was a focus for those who could not, or chose not to return to the COS. During the past twenty years Steve successfully counselled and trained both Scientologists and non-Scientologists. He became accepted as an expert in the field of Trauma Counselling and was co-author of a book on Post Traumatic Stress Disorderl.

Through his expansion into Metapsychology he worked with various organisations, and was recognised by the Queen for his contribution as Victim Support Counsellor after the Brixton (London) bomb incident. Those who sought his help valued his experience and technical abilities. His willingness to share his knowledge was confirmation of his desire for all to improve themselves. He was an exceptionally gifted CS and auditor, and a loyal and dependable friend. He will be missed by many people. We wish him well on his new journey and send him our love. 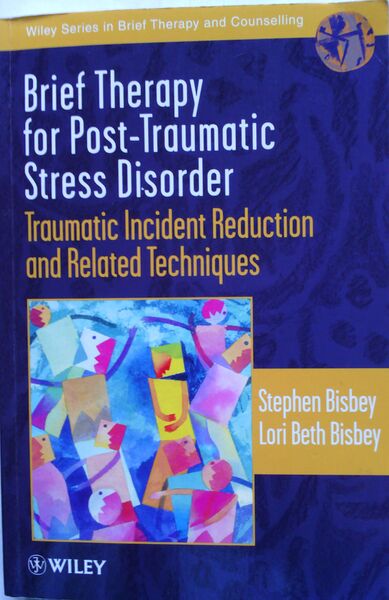 1. Brief Therapy for Post-Traumatic Stress Disorder published by John Wiley and Sons, Ltd, 1998 - the book also contains instructions on Deblocking, a procedure known to Scientologists as Prep Checking, and data on the general auditing attitude (code, communication) as practiced in Scientology. The book is part of the Wiley Series in Brief Therapy and Counselling and thus gives practitioners a chance to evaluate engram running and prep checking without being "confused" by knowledge of its ancestry. See https://www.wiley.com/en-dk/Brief+Therapy+for+Post+Traumatic+Stress+Disorder%3A+Traumatic+Incident+Reduction+and+Related+Techniques-p-9780470859704 for an idea of the prestige and size of the publishing house. Ed.

WHAT CAN I SAY about Steve Bisbey? He was one of my very best friends. He was also, and that was for me the most important. a Case Tech Man of the highest calibre.

Steve was for me, from my viewpoint of the first graduated Class XII and LRH appointed Tech Flub Catch hat, the most unbelievable native auditor, C/S. etc., who had only in name not attained the highest technical grade [ Otto Roos considers Steve quite capable of handling, including c/sing and auditing, confidential materials]. If ever a person had the inborn talents and skills of the highest level as mocked up by LRH to date, Steve was it, and still is, and will be as will be seen in only a few years upon his return.

There were no secrets between Steve and myself. There was no reason for the existence of so called "confidential higher levels" which "he was not allowed to have insight into" etc. From my viewpoint Steve Bisbey was entitled to see and have any and all technical data developed as so called "secret upper level" material.

Why? Because he natively knew and had it all. We had no barriers or stupid "secrecy" between us in our communication. If Steve hadn't innately already had what could be considered the official training of higher levels, it would have been a loss for the world that he had not been in the position to get his full training. But Steve did have the native skill and training, his insight as a C/S was unsurpassed, he was the pure Class XII in spirit! He could and did make the "missing data" his own quite effortlessly.

He had no difficulty duplicating the so-called "confidential data". In fact not only did he do that, he was immediately capable of translating it into his tech compilations, C/Sing and auditing.

Apart. from a great friend I lost one of my dearest and most able colleagues!

Steve was most fortunate to have Frances, his wife, as a wonderful and loving life partner. Her loss cannot be described. Her courage is great! Thank heaven she still has Diana, Steve's daughter, and her own two lovely girls to help her in these days of tragic loss. I have seen how many friends Steve had, many of whom are now giving the most needed support. to Frances and family.

Those he helped[edit | edit source]

Many of those Steve helped were at the church service to give their last farewell. The speeches, the poems, the expressions. and all the people there made it very clear how beloved Steve was and the services he had given the world.

Apart from the many grateful people, there were also personal friends and people he had worked and studied with.They had come from different parts of the world to pay him their respect and tell him of their love. I was in grief when touching his coffin as it went by, and now, much later, I still have difficulty confronting Steve's passing and am protesting the loss of such a person. He was a man who improved the world and all of us by having been here, giving us his love and applying his skills. He will never be forgotten!

Steve has left - temporally. He will be back.

He also expects us, especially those who worked in the same field, from old-timers to newcomers, to continue with the work he lived for. In the friends I saw during and after the church service, in the words I heard and read about Steve and his work, and in my own life which was spent in the same field from the 1950's, I saw the wish, the urge to carry on doing what Steve did and many of us are still doing; helping others and ourselves to raise our awareness, to increase our ability, to heighten our self-determinism and to spread ARC.

Steve led a blessed life. I hope and expect that many of those he knew will follow his example.

In September 1984 after being thrown out of the "Church" in 1983 I went to East Grinstead, to find out if I was complete on audited NOTs, and Steve handled me and found I could go on to solo NOTs (in about 1985). There were two or three other auditors at his Centre, part of the AAC network of the time

The London Underground is a fairly large railway system and occasionally someone wanting to die does so in front of an Underground train (there were no means of preventing people jumping in front of a moving train at that time). Train drivers are totally unable to prevent it, and suffer great trauma. I understand that Steve had a contract with London Transport where he was called in to give therapy to such unfortunate drivers. That is "via verbal comm" and a more reliable account follows, from the front pages of the book Brief Therapy for Post Traumatic Stress Disorder:

Mr. Bisbey has been in private counselling practice for the past 15 years. He specializes in trauma (treatment, training, research and supervision), relationship difficulties and couples work, and the treatment of cult survivors. He has been involved in media work relating to all these areas.
Mr. Bisbey is a Certified Trauma Specialist and works at Victim Support Lambeth weekly seeing traumatized victims of crime. He is a research clinician at the London Transport Trauma Research and Counselling Centre where he is working on a large treatment outcome research project. He spends the rest of his working time seeing clients in private practice, supervising mental health professionals working with traumatized clients, and designing treatment techniques and training programmes relating to his speciality areas.
Mr. Bisbey has designed training materials for the staff support scheme of the East Anglian Ambulance NHS Trust, the 'buddy scheme' for London Transport. He is co-author of a variety of articles on structured person-focussed counselling techniques. Mr. Bisbey has presented at conferences in the UK, the USA and Europe on trauma and has been co-organizer of four conferences for trauma practitioners in the UK.

I understand that he died from one of the rarer, and then incurable, liver afflictions. Tragic, an active, positive contributing Scientologist taken at the age of 53 at the prime of his career.

The death of Steve Bisbey was reported in International Viewpoints, issue 70. You can see that issue at the following link where there is also a poem written at his death: http://articles.ivymag.org/pdf/IVy70.pdf

1. that person in a Scientology Church who gives instructions regarding, and supervises the auditing of preclears. The abbreviation C/S can refer to the Case Supervisor or to the written instructions of a case supervisor depending on context. (BTB 12 Apr 72R)...MORE

1. a mental image picture which is a recording of a time of physical pain and unconsciousness. It must by definition have impact or injury as part of its content. (HCOB 23 Apr 69) 2. a specialized kind of facsimile. This differs from other mental pictures because it contains, as part of its content, unconsciousness and physical pain. (Dn 55!, p. 12) 3. a complete recording, down to the last accurate detail, of every perception present in a moment of partial or full unconsciousness. (Scn 0-8, p. 11)...more