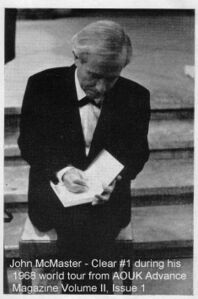 "Some of us have heard something of the strange tale of South African super hero and arch villain, the very first real Clear, John McMaster. We’re sure many more have no idea who he is.

John was hailed by LRH, who C/S’d his auditing, as the First Clear; accorded many accolades, went on a world tour, addressed thousands of rapt listeners and then, by God, he was declared a suppressive person.

Why did he die in a rundown ‘flop house’ in England alone, ill and impoverished?

One can read a real sob story about him on the internet by Googling his name. Although the story you’ll find says he died of cirrhosis of the liver, and that LRH hounded and belittled him because he was gay; someone who was also around at the time said he may well have been an early Aids victim.

But there is more to the story than that.

John came from Durban. He was a brilliant speaker. He exuded love, benevolence and forgiveness. I know at least one person who was convinced he was JC reincarnated. Another, explaining his fall from grace, said “he didn’t believe there was such a thing as an SP and that’s what was wrong with him.”

Let’s take a fresh look at this one time celebrity and read the story of what might have been:

Anyone who has ever done the PTS/SP Course – a one-time MUST – will have encountered the term “Search and Discovery” (S & D). It was regarded as an important scientological procedure which was used when problems were encountered with slow or non-gaining PC’S.

This is the story of the development of that procedure by John McMaster and has been taken from an original article in Ivy magazine.[1]

John in England, by Antony A Phillips[edit | edit source]

I was present on staff at Saint Hill East Grinstead when John joined staff. Possibly it was the end of 1964, when there were only about ten Scientologists on staff at Saint Hill, as the only service we delivered to people who came to Saint Hill was the Saint Hill Briefing Course. A few days previously Monica Jackson (later Quirino) had told us (or perhaps me alone) with some joy that she had talked to Ron and he was going to make her his personal secretary – she was very pleased about that. However a few days later in the afternoon, near the entrance to reception, John McMaster came in brimming with joy from spending time alone with Ron and communicating exuberantly, saying that Ron was going to appoint him as his personal secretary. Perhaps I was the only one in that little group of four or five who did not have their attention fully on John brimming over with enthusiasm, and saw Monica and her obvious disappointment.

After the Big Exodus[edit | edit source]

For a while John lived with Joan and Peter Davis in the English Midlands (Loughborough, Leics). While there he made two sets of cassette tapes, one dealing with some aspect of Scientology tech (possibly either power processing or search and discovery). These were sold on the communications lines of the time (it was before Internet, emails, and CDs)

In September 1986 I went to East Grinstead to find out from the Advanced Ability Centre (ACC) there, whether I was complete on audited NOTs (for some reason I did not trust the delivery unit that was established outside of Copenhagen - 3 kilometres from where I lived!). There was suspicion at that time – who was "really" standard tech, rather than just claiming they were, or perhaps I had an ARC break, for the man delivering audited NOTs and c/sing solo NOTs had been my NOTs auditor at the AOSH in Copenhagen, where I had been unceremoniously thrown out. I had a radio which also could make recordings on cassette tapes, and in my spare time I interviewed some one (Bevan Preece) who had been in the centre of the exodus from Saint Hill, and had connections to Australia, where one field auditor's preclears had resigned from the Church as a group. The rather long interview of him was finished, ready for packaging and sending out, but it was two cassette tapes and the reverse of the second one was blank. I therefore thought it would be a good (and easy) idea to interview John McMaster.

It turned out not so easy, as I had no means of editing the cassette tape, and therefore needed to end at a precise point, and preferably fairly high toned. I tried three or four times unsuccessfully, as John got caught up in his ARC break. They were not good interviews anyway, since I rarely got a chance to ask a question. I have recently (February 2014) found two of the cassettes, and had them converted to modern media, and they are included here. So you can hear John's voice, and get his reality on some things. Here are the two recordings (there is a short silence starting Interview no. 2):


Interview no. 2
Note: At the moment these may not work on your tablet or smartphone - you will need to hear it via a desk or laptop computer.

POTENTIAL TROUBLE SOURCE, 1. a person or preclear who “roller-coasters,” i.e., gets better, then worse. This occurs only when his connection to a suppressive person or group is unhandled and he must, in order to make his gains from Scn permanent, receive processing intended to handle such...More

Search and Discovery - One lists for persons or groups who are or have suppressed the pc. The list is complete when only one item reads on nulling and this is the item...More

One lists for persons or groups who are or have suppressed the pc. The list is complete when only one item reads on nulling and this is the item...More abbr S&D

Advanced Clinical Course - ACC - one of a number of theory and research courses delivered by L. Ron Hubbard during the years 1953 to 1961, which gave a deep insight into the phenomena of the mind and the rationale of research and investigation.