IMeter - bluetooth e-meter in solo can 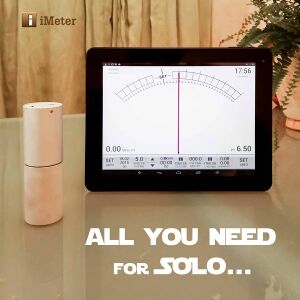 iMeter uses advantages of computer digital e-meters and adds a number of new features, which were not used in e-meter building before, but they directly flow out of the advantages of digital technologies.

Thus, the only logical variant remained - to put e-meter board inside solo can and leave only solo can alone, being the e-meter. To our opinion this is the optimum and most user friendly way of e-meter realization, which keeps the traditional can electrode for taking reads from the person’s palm.

We didn't take into consideration other possible electrodes types, as we are followers of standard tech and established practiсes.

The only minus of such a solution is a bit heavier weight of the can with e-meter and battary inside, compared to empty can, but as we are speaking about the iMeter weight of around 120 gram - the average smartphone weight - we think that this additional weight can be neglected.

On the other hand it gives a lot of advantages. No more annoying cables and disconnecting contacts, preparing iMeter to work takes a second - just push the "on" button.

Finally a wonderful mobility is achieved - you can audit anywhere, just take the can in hand and put your smartphone in front of you. Cafe, train, park - all the world is open for your auditing.

So, iMeter is a digital computer wireless e-meter built-in inside solo can, which works via bluetooth and if needed via USB cable. 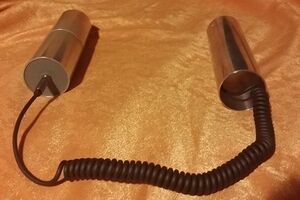 The second can is connected to the main solo can through a connector on the bottom side.

When connected, the two electrodes of the solo can are merged into one electrode and become the first can, while the additional can is connected as the second can.

The second can is connected with a short spring spiral cable which stretches when the distance between cans is increased. This is a comfortable way which does not restrain the preclear movements.

The iMeter works with computers, notebooks, tablets and smartphones with the following OS: Windows (all versions since XP), Mac OSX (10.7 and above), Android (3.x and above).

Unfortunately iMeter does not and will not support in the nearest future Apple iOS: iPads, iPhones and iPods.

This is due to the strict policy of Apple, which forbids to connect non-authorized bluetooth devices to iOS. We are trying to make iMeter available on jailbreak i-devices but it is not made yet. 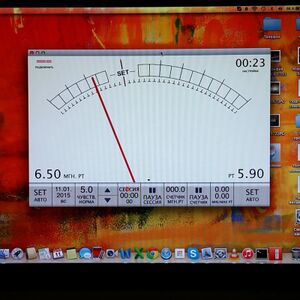 All programs are translated into English, German, Spanish and Russian languages.

The main purposes which we set for ourselves during iMeter program development are hight-quality and naturally moving needle, close to analog one in appearance and behaviour, and the second - interface usability and aesthetics of the program appearance.

In this connection we tried to make the program appearance as much customizable to user preferences as possible - you can adjust color of most program elements, change scale and needle sizes, hide and show graph and control buttons. This is especially useful for smartphones with small displays - you can leave on the screen only needle and main data like TA and clock, or adjust screen colors to dark tones to save battery life. We tried to make program controls big enouth and comfortable for operating even on devices with small screens (smartphones). We are surely only in the beginning of this way, but we propose you to evaluate our first relults. Hope that together we will make as perfect product as possible, which is in line with the perfect technology that we have.

The iMeter uses a modern high quality bluetooth module providing reliable and stopless iMeter connection to computer devices in any can position on a distance up to 10 meters.

More than a year of tests of more than 50 users have not shown problems with the connection reliability on majority of devices of trusted brands.

On some devices of not so well know and mainly Chinese manufactures there can be problems with connection due to poor quality of bluetooth chip installed. 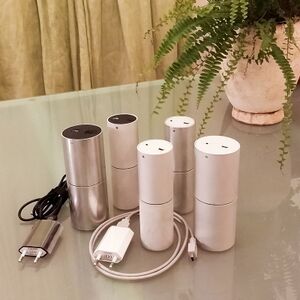 iMeter is presented now in two can diameters: 4 and 5 cm. Soon we will have 4.5 cm can diameter meter.

The cans are made of aluminium covered with a tin coating of 30-50 microns thick.

This thickness is enough for the solo can to serve for quite a long time. A layer of this kind and thickness allows to make a spare polish of the can.

Even if the coating wears off, underneath it is the aluminium case, which is also an allowable can material according to LRH.

Can replacement is also a simple act - turn off 2 screws, take out the cap with the iMeter board from the can, disconnect the internal connector - and the device is ready to be installed into a new can.

iMeter has a built in battery of 600 mAh which provides 15-20 hours of non-stop work of the device.

When auditing 2 hours a day, the device can work for more than a week from one charging.

A battery of this type does not make the device too heavy, the iMeter weighs around 120 gram.

Who works with our meters[edit | edit source] 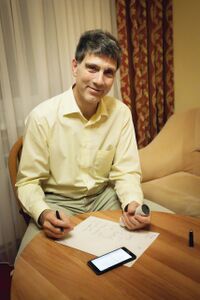 iMeter history on the market is already more than 2 years long, and we already sold more than 200 meters and have several distributors in different countries.

Russia. Ron's Org Russia - we sold meters to solo and regular auditors in almost all Rons Orgs in Moscow and rest of Russia.