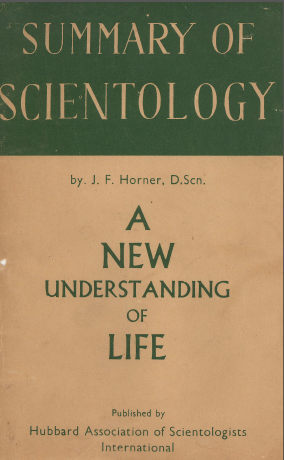 Summary of Scientology is a volume of about 90 pages written by Jack F. Horner D.D.; D.Scn. [1] and published by HASI (HUBBARD ASSOCIATION OF SCIENTOLOGISTS INTERNATIONAL) London 1956.

Jack Horner already in 1950 joined L. Ron Hubbard as a Dianetics Lecturer, Instructor and Auditor and later (1955) he conducted a few of the AAC (ADVANCED CLINICAL COURSE) in London and South Africa.

The book contains, in condensed form, all the fundamentals and basic principles of that vast field known as Scientology.

It is of interest to point out that at the time this book had been written (1955-56) Scientology had just evolved from Dianetics and was not yet developed to its full extent. Never the less the basic principles and its philosophical framework had been already established.

Jack Horner, no doubt, was expertly familiar with the subject. He introduces the reader on less than 100 pages to this vast body of knowledge. He does that in a clear and fluid, easy to assimilate prose. This, paired with a sensibly chosen gradient, makes the book - even today - a good entry point for the interested novice and as well it could serve as a dissemination tool or the basis of an introductory lecture course series.

The book can even be beneficial reading for those who are already familiar with the books and taped lectures of L. Ron Hubbard. Or those who had received academy training. This is because Jack Horner was a gifted lecturer himself and presents the material naturally from a slightly different angle than Ron Hubbard did. He does that without ever truncating or altering the source data.

For the current reviewer e.g. the part regarding the "Chart of Attitudes" revealed some new aspects and deeper understanding.

Is there anything about the book which one could complain about? Hardly in an objective way. Perhaps on rare occasions Jack makes oversimplified remarks about politics or the society. Those are reflections of his personal views and as such do not fit well into his otherwise prosaic style. However, the value of the book is certainly not reduced.