John Wood Campbell, Jr. (June 8, 1910 – July 11, 1971) was an American science fiction writer and editor. As editor of Astounding Science Fiction (later called Analog Science Fiction and Fact) from late 1937 until his death, he is generally credited with shaping the so-called Golden Age of Science Fiction. [1] 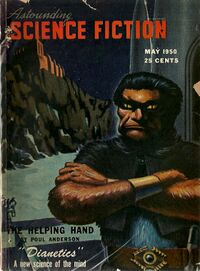 Perry, a local acquaintance of mine, recently gave me a copy of a 100+-page piece he'd written in 2012, entitled "Introduction to the First Publicly Known Clear." The following excerpt is taken from the first page,[2] and it explains the importance of LRH's Dianetics, The Modern Science of Mental Health having been first publicized in a science fiction magazine, of all places.
Kitty James

"L. Ron Hubbard's Dianetics, The Modern Science of Mental Health made quite a stir throughout the world when it was published in 1950. Psychiatry was a failed profession in those days -- and pretty much still is. Hubbard's Dianetics offered a detailed self-help understanding never before reached by other methods.

"Original publicity of Hubbard's book was reached through the pages of a science fiction magazine through the acceptance by John W. Campbell, Jr., the editor of Astounding Science Fiction. Since those days, science fiction and fantasy have become mature fields of literature, not to be disparaged as it was so easy for some to do in those days. However, the important aspect of being published in Astounding Science Fiction was that its readership was far from that of gullible teenagers. Scientists, teachers, engineers, lawyers of every rank subscribed, and often corresponded regularly with John W. Campbell, Jr. Campbell greatly influenced scientists, engineers and writers. His magazine's subscribers included Albert Einstein (general and special Theories of relativity ; E=MC2), Edward Teller (father of the hydrogen bomb), and Werner von Braun (developer of Germany's and America's first successful rockets). According to Herman Oberth (early rocket scientist), the Rand Think Tank (Rand Corporation), employed by military and other government experts, was also the fruit of Campbell's thoughts.

"Scientists and engineers thought so highly of him that there is a crater on Mars named after him, the Campbell crater! 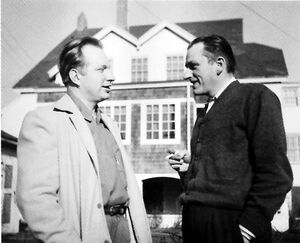 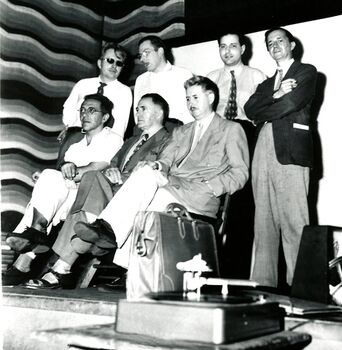 "The magazine Campbell edited became the cerebral playground for engineers, physicists and philosophers and was consistently widely distributed throughout colleges and universities.

"The multi-billion-dollar science fiction and fantasy movie and TV industry owes major debts to Campbell, who brought mood and magic into these fields.

"Gene Roddenberry, a fan of Campbell's and the developer of Star Trek and Star Trek Generations, was profoundly influenced by Campbell. Star Wars and its series, and dozens of other popular, economically lucrative movies follow formats and principles first espoused and placed into print by John W. Campbell, Jr.

"One of the very few science fiction writers not trained by Campbell was Ron Hubbard, a wizard of a genius in his own right -- eagle scout, explorer, aviator, world traveler, and writer of western tales, true adventures ... oh, yes! According to Campbell, Hubbard could also carry a tune in any part of four harmonies!

"During the forties and later, L. Ron Hubbard wrote some of the definitive fantasy and science fiction stories, many published in either Astounding Science Fiction or Unknown magazine, the latter [being] a short-lived Campbellian publication dedicated to the telling of fairy tales in a modern vein. L. Ron Hubbard was superb in Astounding, but in Unknown, he excelled.

"Single-handedly, Campbell created modern science fiction as a vehicle for a new way of thinking! He is considered by many to have had the most challenging mind and the most constructive influence on the United States from the 1930s up to the end of the 1960s.

"Looking back on the true influence of Astounding Science Fiction magazine, only now can we begin to realize the huge influence Campbell had on promulgating Hubbard's Dianetics! Furthermore, this was not simply a public relations stunt, because John W. Campbell and his wife, Margaret, practiced the principles of Dianetics until each passed on.

"The above brief description of John W. Campbell, Jr. should set to rest the idea that "Dianetics was promulgated in just a science fiction pulp magazine!" Yes ... but a magazine with tremendous reach and influence! As fact, the book Dianetics took off like a rocket!"