Joe van Staden is a Scientology pioneer, one of the first Sea Org members, Class VIII auditor and served as Captain of Sea Org ships. His stories and perspectives are an invaluable part of the Scientology story. 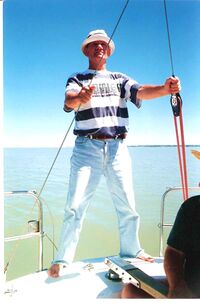 You may or may not know of my past involvement with Scientology and L Ron Hubbard. Suffice it to say, for now, that I was fortunate to spend considerable one on one time with LRH. This was particularly the case when I was captain of the flagship – mostly the Apollo but at times the Athena. At that time, as flag captain, I was, to all intents and purposes, second in rank and only answerable to LRH in terms of organizational matters and structures.

It was during these one on one encounters with LRH that I got an inkling where he was heading org and tech-wise – he loved talking. What I am about to say now I don’t expect will be very popular amongst many Scientologists. The Standard Tech idea was a “consolidation” step, meant to stabilize developments for a particular period in time. It was never meant to close the door on new developments in tech, it was only meant to consolidate “conquered territory” for a period LRH deemed necessary. .

Anyone who worked with LRH in the early years will tell you he was in constant create mode. In the early days at St Hill, new procedures, new course check sheets appeared every week. He knew very well the need to stay in touch in an ever changing world. Hence the Qual division.

Why am I mentioning all this? Because the work I have done over the past 20 years or so is a continuation of a spiritual path I was on even before I encountered Scientology. My involvement in Scientology enhanced my progress in this regard in very interesting ways. My point is that the contribution I am able to make will not strictly follow the Standard Scientology line, but it will be in line with thinking I see emerging from amongst some ex-Scientologists.

My most recent work is a list of close to 100 questions; many of them frequently asked questions to which I provide answers. It is aimed at a much wider audience than ex Scientologists for instance.

By the way, the answers given to these questions, are from a different perspective as those likely to come out of Scientology.