Bill Robertson, "Captain Bill" or "CBR" was a very colorful and popular Scientology figure who is still revered to this day especially in Europe where he spent many years building Scientology organizations and the Ron's Org[1] network.

CBR had an intense technical training. He did the Class VII course and internship in Saint Hill around 1966 and was appointed Director of Review by LRH. Later on the Apollo he did his Class VIII course.

CBR did many missions to various orgs and AOs. He also held at various times temporary CO posts, e.g. at the Flag Bureaux in Clearwater around 1980. He was assigned several Power- conditions for his accomplishments. A commendation for one mission is mentioned in FO 2376 of March 1970. 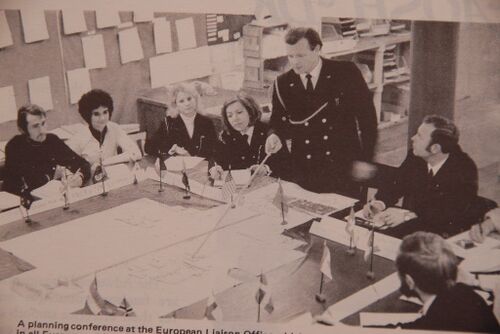 I worked under Capt. Bill in the 3 golden years 1970-73 at EULO in Copenhagen, where we got Europe booming. There was no suppression, almost no use of ethics. No declares. No RPF. When we started there were 3-4 staffmembers in Münich Org (Germany). When we left there were 80. Here you see Capt. Bill. I am the photographer.(Ole Gerstrom)

CBR was awarded the rank of “Right Arm” (RA), granted the title of Captain and he was 2nd Deputy Commodore (1st deputy was Mary Sue Hubbard). He also as one of very few people was awarded the Sea Org Officer’s Dirk. Finally, with the Flag Conditions Order 381-1 of April 30, 1975, he gained another special award by LRH: "Captain W. B. Robertson, Right Arm rank, is hereby awarded the status of Kha Khan for excellent duty as Captain of Flag ship Apollo and a long career of success and high statistics in the Sea Organization." Originally in the times of the Mongols “Kha Khan” meant that a person who was Kha Khan will be forgiven the death penalty ten times – in the Sea Org it changed to mean that a Kha Khan could get away with nearly everything and still had Ethics protection. Of course this did not mean an invitation to behave like a criminal, but was a symbol of the high trust LRH had regarding this person.[2]

Captain Bill explains what is really going on with the fourth dynamic (mankind) on planet earth and elsewhere.

Keep in mind this recording was made in the mid-1980's - you'll be amazed at the incredible accuracy with which he describes the roll-out of the suppressive plans for all of us and note that his solutions are as applicable now as they were at the time of this recording.

CBR briefs a new tech team on how implanting is done, what the implanters fear most, how you can avoid being the effect of their activities, why the church is not making real OT's...and many other topics.

1. any one of the eight subdivisions of the dynamic principle of existence-SURVIVE. (PXL, p. 49) 2. dynamic is the ability to translate solutions into action. (HFP, p. 171) 3. the tenacity to life and vigor and persistence in survival. (DMSMH, p. 38)

1. a painful and forceful means of overwhelming a being with artificial purpose or false concepts in a malicious attempt to control and suppress him. (Aud 71 ASHO) 2. an electronic means of overwhelming the thetan with a significance. (HCOB 8 May 63) 3. an unwilling and unknowing receipt of a thought. An intentional installation of fixed ideas, contrasurvival to the thetan. (SH Spec 83, 6612C06)