In the 1952 edition of L.Ron Hubbard's book Scientology 8-80 the last 25 pages are entitled "The Appositions of Scientology", and are marked as being "Compiled by ALPHIA HART, B-Scn". The Aberee would definitely be regarded as a "squirrel" magazine today as you can see from the front page of one issue. 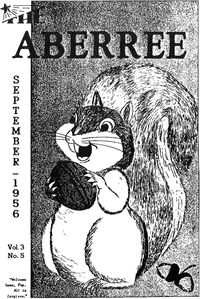 In Ability‡ 14 (1955) there is a short article headed "HART GOES BOOM" (There was a popular song at the time which started "Boom! Why does my heart go boom? ... 'cos I love you." https://www.youtube.com/watch?v=vtJOT5w2Mvk).

The article continued in part as follows: "The HASI, having been under attack too long, has decided to roll some heads. After a long career of being non-factual Scientologically, lying, in fact, Mr. (NOT Rev. or Dr. for some time) Hart is having his ears pinned back by the LAW in Enid. The HASI attorney there is about to lower the boom to the tune of multi-thousands in damages. Hart has told one lie too many. Our attorneys were interested that Hart was actually dismissed from the HAS some years ago for lying to L. Ron about the organization income, so it seems that prevarication is an old habit that should be broken for the public good. The PBR, a squirrel book in England, similar to Hart's rag ALTITUDE, under investigation by the King's Detectives - for some time has finally announced that it will give an interview to them. McVillan, the editor, has not yet told anyone who finances his rather prententious [sic] magazine to the detriment of British Scientology. We also notice Horsetail O'Brien, as she used to be known, having disposed of a husband, is back offering HAS books to the public at vast discount. ..."

‡ Ability was one of the two Scientology membership magazines in the 50s, being published in USA (the other was Certainty, published in England - both went to all paid members).