My father introduced me to Scientology in 1954.

In about 1975, before personal computers, when cassette recorders were more the thing, I interviewed my father about his introduction to Scientology. I think he had had a stroke prior to my interview which had destroyed his speech, but he had subsequently regained it to a fair degree. 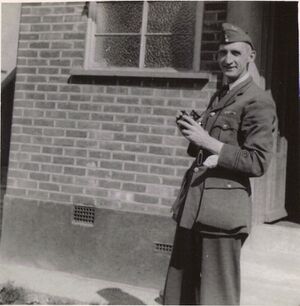 During the first part of the war he worked at night in the Observer Corp, spotting planes as they came over his area (data used for air raid warnings, and defense), and in the latter part of the (1939-1945) war he worked in the evenings teaching aircraft recognition to young men who were about to reach the age when they would be called up for military service. In the case of those he taught, they had already been selected as aircrew in the Royal Air Force (RAF) and thus he has an RAF uniform in the picture above, showing him outside the flat we moved to because of the war in West Ealing, London. His office had been moved to the other side of London to where we lived in Eltham, and he said that when he drove to work he had to take a different route each day because bombing had destroyed part of his route. 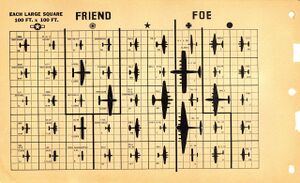 He was a member of something with a name like the Institute for Psychic Research (Society for Psychical Research)[1] where they researched whether things like thought reading were possible. He mentions this in the interview, but I think gives the wrong name. He mentioned to me once, as an example, that they did tests showing cards with symbols on to some one in one room, and having someone in another room "read" the symbols.

I find the two example of Scientology techniques used in the early 50s, on my mother and in a demonstration, fascinating. In my interview with him I was also aiming to get him to describe the sort of people interested in Scientology at that time, and the environment generally.

My father died four or five years before I was thrown out of official Scientology. We were therefore both "in" at the time of the interview, though my father was completely inactive.

At the beginning my father describes how he and blind Jack Hotchkison (?spelling) first met Dianetics. In the DVD LRH Stories [[1]] there is an account of how, about eight years later, Ron rang Jack Hotchkison (who was blind) and asked Jack to take a look at Saint Hill Manor as Ron was thinking of buying it. Interesting that Ron kept a line to Jack over that period.

(I am sorry the sound quality is poor at the beginning - it improves later. My father refers to the Psychosomatic Research Society in the beginning, this is an error, and should be the Psychic Research Society. He told me a bit about it and they were doing things in the nature of somebody looking at some cards in one room and somebody in another room saying or attempting to say what card was being looked at.)