From Scientolipedia
Jump to: navigation, search 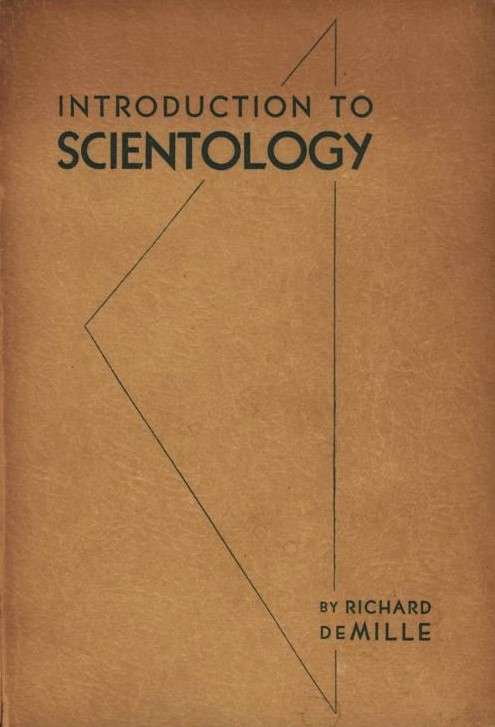 Introduction to Scientology is a volume of about 150 pages written by Richard deMille, Ph.D [1] and Published 1953, by Scientology Council. Table of Contents:

Scientology
The Language of Scientology
The Theta1. theta is thought, life force, elan vital, the spirit, the soul, or any other of the numerous definitions it has had for some thousands of years. (SOS, p. 4)...More

Theory
Self-Determinism
The Tone Scale
Aberration1. a departure from rational thought or behavior. From the Latin, aberrare, to wander from; Latin, ab, away, errare, to wander. It means basically to err, to make mistakes, or more specifically to have fixed ideas which are not true. The word is also used in its scientific sense. It means departure from a straight line...more

The book starts with a definition of Scientology and its most important technical terms. That and the book's title suggest that the roughly 150 page volume is primarily targeted at readers who are still strangers to the vast body of Scientology.

The Author's cultivated prose as well as the view he takes on the subject make this book interesting and easy reading for anyone no matter how familiar with Scientology. The reader is neither confronted with a dry scientific text book nor with a work written in the long winded fashion of some pure philosophical texts. Nor is this a Scientology advertisement pamphlet.

The author shows great sense by giving a proper gradient for the novice reader without ever getting trivial. This, and the fact that deMille's convincing knowledge of psychology, the human body and life, in general paired with a tolerant attitude toward professionals from outside Scientology, make this book valuable reading for those who feel repulsed by the sometimes intolerant attitude of L. Ron Hubbard and some of his followers towards everything which is not in lineThe military type of organization form whereby there is a definite ascending and descending chain of command. Orders pass from top management down the line of command and compliances and data pass on up without by-passing the chain of command. (Modern Management Defined (c) L. Ron Hubbard, 1976)

with the doctrines of the Church of Scientology. That does by no means suggest that deMille opposes basic Scientology principles.

R. deMille shows a fine and intelligent sense of humor throughout this book and never forgets to put in abundant practical examples when he explains complex interrelations.

Still, the interested reader may find lots of passages in the book which may inspire new cognitions on topics he or she thought had previously been thoroughly understood. Mr. deMille's insights and deep understanding of Scientology and other professions give the reader some added value even when being familiar with the writings and lectures of L. Ron Hubbard.

Due to the author's excellent writing skills and his humanistic attitude, this book communicates well and may have the potential to bridge the reality gap between Scientology and those therapists who have their ideological, philosophical or professional home somewhere else.

Compared to Ron Hubbard's diction the author shows more tolerance and thus a more practical attitude towards the human body. This may make Introduction to Scientology a text book with the potential for higher acceptance to a broader public than other publications about Scientology.

Last but not least, a surprising large portion of the text is devoted to artists. That may appear peculiar to the reader. But only as long as one has not yet found out about Richard deMille's famous ancestor.